Abstract
Today, one of the most important litigation topics studied by jurists is the discussion of concepts such as the powers, duties and jurisdictions of the courts in the strategy of litigation. Foreign jurists have written about these concepts, and this has led to discussions in Islamic law as well. However, in the rules of procedure, the existence of important goals such as predetermined order and protection of the rights of the parties and, most importantly, the realization of rights and the settlement of lawsuits, require the interpretation of the rules of procedure in a special way. The courts consider themselves bound by the texts, precedents and customs of the judiciary, but it should be known that the development and opening of the way to the trial is left to the legislature and to clear rules rather than to the interpretation by judges. This is also the case with the rules of procedure. This task is done in the case of the rules of procedure, sometimes by the judiciary itself, while preserving the veto power of the legislature, and sometimes by presenting drafts to the legislature by the judiciary. In addition to these rules, the principles of procedure also govern the procedure, and the objectives of the procedure are also reminded to the judge in the laws. Among the principles of litigation that can be mentioned are the principle of speed in the proceedings and the principle of dominance of the parties over the dispute. If we consider the purpose of organizing a hearing to resolve disputes between the parties and the realization of rights in an efficient manner, the best way in our country's procedure law, where judges have less legislative innovative and interpretative powers, is to make good use of legal tools that are embedded in the laws. The question of how such tools help can be explored as their use leads the court to achieve pre-determined litigation goals. Among these tools, is the depending of one judicial decision to another decision. However, Iranian courts do not make much use of it and even in lawsuits where this decision is induced, judges are not willing to issue this decision. As an example, we can refer to the vote number 791 of the General Assembly of the Supreme Court. Considering that these decision is based on two important principles of the trial, namely the principle of hearing the disputes and the principle of speed in the proceedings, it seems that the failure to use this decision is not only against the principles, but also causes disputes to be returned to the judiciary, delays in proceedings and accumulation of cases in the judiciary. The purposeful and flexible interpretation method should also replace the narrow interpretation of Article19 in order to add items to this provision. In the comparative realm, the French law has also used the title of suspension of proceedings (La suspension de l’instance) for such a purpose, and the issuance of such an order not only makes the trial in accordance with the law and complying with it and maintains the order, that is the most important goal of the rules of procedure, but also fulfills the goal of justice and the realization of the rights and the principle of speed. Depending one judicial decision to another decision or the suspension of proceeding is not desultory and cannot be considered unregulated under the pretext of the principle of speed and similar goals. Jurisdiction of another court to hear the case, ability to file a case (one on which the other is dependent) in a competent court, the effectiveness of proving the claim in the main lawsuit, administrative or judicial authority of the court (dependent on it), hearability the of the main lawsuit, dependent lawsuit not being filed before the main lawsuit, and filing the claim by the plaintiff are the conditions for issuing this decision while this agreement can be revoked and not be complained. 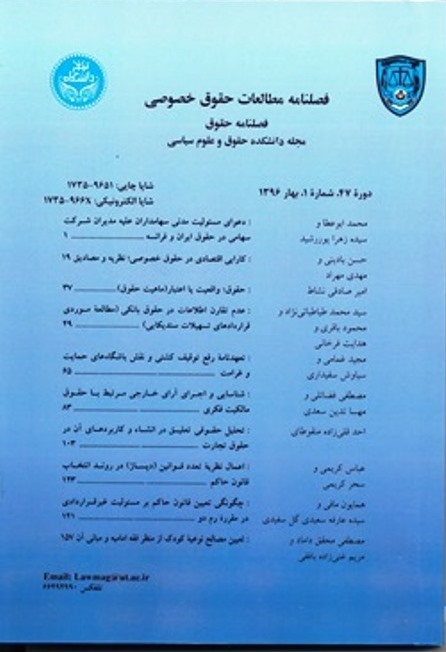